Kerry Evans, a standout Odessa High track star, was born and raised, along with her brother Kinney Evans, in Odessa by her parents Jackie and Paul Evans.

Kerry gives so much credit to her parents for helping her reach her athletic level.

“As a kid, I played everything. If it was offered, I was on the team. I’ve always been a sporty girl,” Evans said.

As an elementary school kid in Pease, her parents drove her everywhere to practices and games. She played volleyball, basketball, and track and field and was voted Most Outstanding Athlete in sixth grade.

In the summer, she mostly played softball and soccer. During her high school years at Bowie Junior High, she decided that track was the sport she loved after setting the city record at 110 and 220 yards.

She still holds that record today.

These early sporting events helped him hone his skills on the track. Evans still holds the record for women’s high jump at Odessa High School. She was also twice state qualified in the 200 meters and placed 5th both years. She also anchored the 4×100 meter relay which also qualified for the state. Evans also holds the 200 meter record (23:58) at Wayland Baptist University. 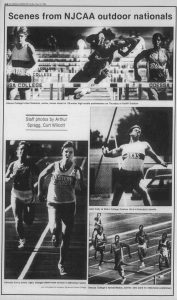 At Eastern Oklahoma Junior College, she attended three years and ran for two years. Her trainer Glen Stone was instrumental in getting her to where she could compete at her best.

She transferred to Missouri Baptist University where she ran and eventually graduated. John Creer, her trainer at Missouri Baptist, was also influential in her track career.

Evans intended to coach athletics and did so at Missouri Baptist, Lindenwood University, and a year at Odessa College. She realized that it would be a difficult lifestyle to raise a family, so she chose to work in her family’s carpet business for the next 22 years.

She still lives in Odessa, where she is married to Paul Hart and is a certified personal trainer/health and life coach. Knowing so many people helped her build a clientele for her business.

She is the proud mother of two daughters – Kali Holcomb, 26, who played softball at Angelina College and University Bowling Green; Kyndi Holcomb, 24, who was a cheerleader at the University of Texas at Austin and son Cade Holcomb, 21, stepson Nick Hart (31) and three-year-old grandson Levi Hart.

Evans was nominated by her cousin who is also a good friend, Brandi Hayes. Hayes had this to say about his athletic cousin.

“Kerry is one of the most accomplished female athletes to ever come out of Odessa. Her accomplishments speak for themselves, but what I can tell you is that she is so humble about everyone. Above all, she was really proud to represent her school and her hometown.

Evans hopes Odessans will realize that she loved her hometown enough to come back to live and raise a family. “The city has been good to me,” she says.

Don’t miss the Odessa Athletics Hall of Fame Banquet scheduled for 7 p.m. on Nov. 3 at the Odessa Marriott.